Secure your spot & get started today with our FREE EXCLUSIVE online offer!

By opting into the web form above you are providing consent for Fusion Martial Arts to send you periodic text messages. Standard rates may apply. You can reply HELP at anytime or learn more. You may opt-out anytime by replying STOP.

Greg & Megan are 2 wonderful people who are motivated & dedicated to changing lives through martial art training. Their vast knowledge in the martial arts is 2nd to none in the Normal area. If you are looking for a credible martial art school that you can go & learn in a safe, clean & friendly environment then Fusion Martial Arts is for you.

I have had the privilege of knowing the Instructors for several years and they have a real passion for teaching, and helping others! Fusion Martial Arts offers great self defense training and a family friendly environment all provided to you by their top notch instructors!

Greg and Megan taught my kids for several years and are excellent instructors. Highly recommend them, as well as the martial art of Fusion!

Mr. and Mrs. Farris were my son's instructors at Kuk Sool Won of Peoria. They are good with children, and they are good instructors. My son loves them.

When I travel to central IL this is the ONLY place I will train! The Staff is amazing, the school is immaculate and the energy in this place makes you want to stay for hours!!

My son has been in Fusion Martial Arts for just a few weeks and he’s loved learning here! Megan and Greg are wonderful instructors and they offer a very hospitable atmosphere. Seeing my son gain more self-esteem and confidence week after week is priceless. I would highly suggest Fusion Martial Arts!

Our son has autism and it takes him a while to focus and he doesn't always understand what's being asked of him. It was very hard to watch what I thought was him struggling, but in fact he was learning and they could see that!! Greg and Megan are completely phenomenal with him and all the kiddos. They love the kiddos so much and are so supportive to all the families.

My son has been going here for the last six months and not only is it a fantastic martial arts school but the best place for character development as well! Don't look anywhere else.

Fusion Martial Arts is an amazing opportunity for all ages to grow! The family you gain in training is priceless, the memories even better! Great for body, mind & soul! The instructors are amazing people who love to share what they have practiced in a super comfortable atmosphere!!!

Our family has had a wonderful experience at Fusion Martial Arts of Bloomington. The instructors are passionate, experienced, and so welcoming. Our three-year-old son has been participating in the tiny tigers class and absolutely loves it. My son has so much fun and learns a lot as well! If your son/daughter has an interest in martial arts, we would highly recommend Fusion Martial Arts of Bloomington!

A well run facility, you can tell the Instructors care about their students and are truly passionate about what they do. I couldn’t recommend this school more!

Megan clearly cares about supporting and nurturing children to learn and be their best. My son loves being able to learn new skills and have a positive outlet for his energy. Greg and Megan both work hard and and are caring teachers and respectful people.

Discipline- check. Fun - check. Great for the body and mind - check. Fusion Martial Arts has to be checked out. Wonderful folks. 🏆

What a great husband and wife team the owners of Fusion Martial Arts make! Both are full of life, energetic, compassionate, love working with children, and most of all, have a desire to share their many years of knowledge of the martial arts. Joining the martial arts will be one of the best decisions you will make in your life, it's not just kicking and punching, it's a community that's an extension of your family.

Great for young and old. My son has learned discipline and confidence. The physical fitness has eliminated my chronic back pain, and we have both learned priceless self defense techniques. These 2 blackbelts are engaging fantastic teachers.

Megan and Greg are some of the best instructors you can ever find. They have great attention to detail. They also know how to work with each person's individual learning style. You will not be disappointed when you join the Fusion family.

I like attending Kickboxing #1 the comfortable non judgemental atmosphere.
#2 The people i like the people and the instructors. Everyone is so supportive and we just have amazing fun sweating and all.
#3 Greg pushes you to be successful, but he doesn't push you past your limits.
#4 I like that Greg listens to you about any concerns and if you can't perform the specific workouts he'll MODIFY the workout for you.
#5 Last but not least it works. Omg you leave feeling sore, but amazing. The workouts taught help you to get a full body workout and you build muscle.
I would recommend it to anyone, thanks the Team for helping me change my life.

Love the work-out and Greg is a great coach/trainer. I feel stronger! Great place and team mates! 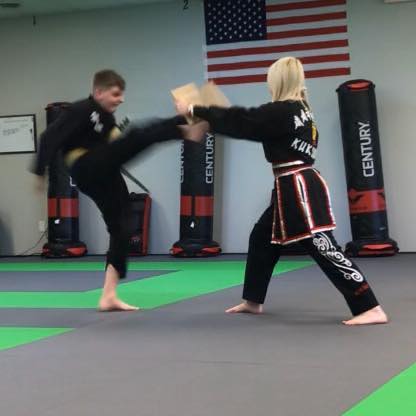 I don’t even know where to begin. This place, these people, this family...they’ve changed our lives. I’ve seen amazing growth in my son in just the month that we’ve been with Kuk Sool Won. Leadership, self-confidence, personal growth, respect, willingness to help out, these are just a few of the numerous ways Greg and Megan have helped my son. Their patience, understanding, and style of teaching have given us so much more than just the martial arts that we signed up for. They are not only fantastic teachers, but the mentors we would all wish for our children. I can’t imagine our lives without Megan and Greg and Kuk Sool Won of Bloomington.

It is a fun experience. We get a good workout but they make it fun at the same time. If there is something i cannot do i am not pushed to do it, they will help with another alternative to the exercise. The place is clean and Very comfortable to workout in.

The exercise is fast and furious! Nothing boring or overly repetitive! Great support and coaching and camaraderie among participants. I’ve toned and lost weight but super sustainable goals.

Request information today to learn more about our programs! Get Started Now

Martial Arts in the Military

When you think of the US military, you probably think of high-tech weaponry – smart bombs and things like that. What you might not know is that the martial arts play an important role in military training.

Being proficient in hand-to-hand combat can save soldiers’ lives. There are several forms of martial arts that are commonly used in military training.

The Marine Corps Martial Arts Program, or MCMAP, was designed to train US Marines. It was created in 1956 by Gunnery Sergeant Bill Miller, who was put in charge of the Marines’ hand-to-hand combat training. It combines elements of:

MCMAP trains soldiers in the mental, character, and physical traits needed to defend themselves. It uses a belt system similar to the one used in civilian martial arts training. However, it also teaches basic knife, bayonet, and firearms techniques, as well as how to find and use weapons of opportunity.

How successful has this program been? In 2017, the UFC sent five of its best fighters to take on US Marines in hand-to-hand combat. The UFC fighters lost badly.

The US Army has a similar program called the US Army’s Combatives Program.

Tae Kwon Do is a Korean martial art that was originally developed in the 1940s and 1950s. Its creators were men who had studied a variety of martial arts and taught them in schools called kwans. In 1952, after witnessing a martial arts demonstration, South Korean President Syngman Rhee called for the creation of a unified Korean style of martial arts.

The original name of this discipline was Tae Soo Do, which combines three words:

Eventually the word kwon, which means fist, replaced soo in the name, and Tae Kwon Do became the official name. As a discipline, Tae Kwon Do emphasizes speed and agility, training fighters to use head-height kicks and spinning techniques to defeat their opponents.

Jujitsu has its origins in the Muromachi period in Japan, which ran from 1336 to 1573. It came from a style of fighting that prioritized using an opponents weight and momentum against them instead of striking them.

The name Jujitsu did not attach itself to the discipline until the 18th century. Loosely translated, it means “the gentle art” because of its focus on leveraging an opponent’s actions instead of actively striking out against them.

A common variation taught in the military is Brazilian jiu-jitsu, which is a technique that focuses on ground fighting. The idea behind Brazilian Jiu-Jitsu is that a smaller opponent can overwhelm a larger one by taking the fight to the ground and using chokeholds and joint locks to win the fight.

Krav Maga is a unique style of martial arts developed for the Israeli Military. It dates to 1910, when a man named Imi Lichtenfeld. He had learned various fighting techniques from his father, and eventually combined them into Krav Maga.

The focus of Krav Maga is on ending fights quickly by targeting the most vulnerable parts of the body – usually the groin is the focus. It was designed for use in real-world situations. Its practicality appealed to the Israeli Military, which adopted it and incorporated it into their training – and there’s no question that Krav Maga training is one of the things that gives the Israeli military its formidable reputation.

Martial arts training is used to help service members defend themselves when traditional weapons alone might not be enough. The success of MCMAP and the Israeli Army’s Krav Maga training are proof that learning the martial arts can save lives.

Fusion martial arts is a system that combines the best of Korean Traditional self-defense and Modern MMA. Our goal is to educate, empower, and inspire individuals to take control of their lives through self-defense training.